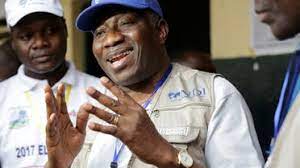 Former President, Goodluck Jonathan has said politics should not be used as an avenue to commit a crime.

He expressed concern over the negative energy being generated by the political class in the build-up to the 2023 general elections across the country.

The former president, urged security agencies not to spare anyone who commits crime under the guise of politics. Vice President Yemi Osinbajo will depart for Liberia to attend the Emerging Young Leaders Forum. A statement signed by the Senior Special Assistant to the Vice President on Media and Publicity, Laolu Akande, disclosed that Osinbajo’s one-day visit is at the invitation of his Liberian counterpart, Jewel Howard-Taylor, who is marking her 60th birthday. The statement noted that the Vice President and other West African leaders will interact with a selected […]