Akwa Ibom Government to Investigate Cause of Collapsed Building

Akwa Ibom State Government has promised to set up a panel of inquiry to investigate the immediate cause of a four-storey building that collapsed in Uyo, the State Capital.

Deputy Governor, Moses Ekpo, who visited the scene on Sunday, commiserated with the families of deceased victims.

Ekpo promised that the government would investigate the matter and ensure that those found culpable would be brought to book.

This came as two persons have been confirmed dead in the mishap while three others rescued are critically injured. 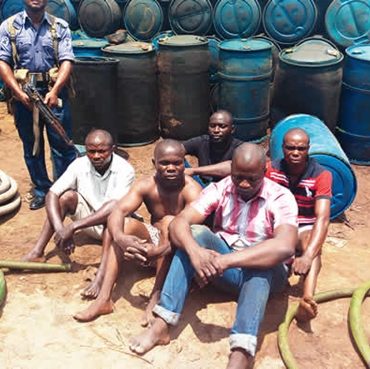 Delta State Command of the Nigeria Security and Civil Defence Corps, NSCDC, has arrested eight suspects in connection with crude oil theft and pipeline vandalism. A statement issued by the Command’s Public Relations Officer, Emeka Peters Okwechime, revealed that the suspects were arrested along the Warri Sapele Road. The statement added that the arrested suspects would be charged to Court upon conclusion of investigation.